This postcard is dated June 14, 1910 showing Donner Lake near Truckee, California. If you look closely at the writing on the front you can see the words “Patty Reed” over the lake, “Mrs. Frank Lewis” above the shoreline, and to the right between the trees (from left to right) “1846” “onward” and “June 10, 1910.”

It turns out that Mrs. Frank Lewis, of Santa Cruz, California, was little Patty Reed, the youngest survivor of the Reed and Donner Party, now commonly known in California history simply as “The Donner Party”.

From an abstract describing a collection of the diaries of the Reed and Donner Party:

“On April 15, 1846 the families of James Fraser Reed and George and Jacob Donner, comprising 31 people in 9 wagons, left Springfield, Illinois for California. On May 19 the party joined a larger wagon train captained by William Russell about 100 miles west of Independence, Missouri. Other families and individuals joined the wagon train as the party traveled westward and by the time the party departed Fort Bridger in southwestern Wyoming the total number of people had grown to 74 and the total number of wagons to 20. By early August, as the party entered Utah, 87 people and 23 wagons were bound for California. Following inaccurate advice they received en route, the ill-fated party, now captained by George Donner, opted to take an untried cut-off to the west. This “shortcut” put them weeks behind schedule, and by the time they had crossed Nevada and began their ascent of the Sierra Nevada it was too late in the fall season. Heavy snowfall stranded them in the mountains and for five months the group was trapped on the eastern side of the Sierra. Of the 87 men, women and children in the Donner Party, only 46 survived.”

The Donner Party history is often known for the horrific methods used by them to survive, but that is not the whole story. Their story shows heroism and cowardice, sacrifice and selfishness, to despair amongst the many different personalities subjected to the ordeal.

I was once lost in those mountains above Lake Tahoe when a blizzard blew in while I was snow shoeing. I wandered around in circles for hours because I could not see the mountains or landscape to get my bearings. Just when I thought my strength would give out I heard a snow mobile and was able to follow the sound to safety and back to the road where my car waited. So, I sympathize with these poor people who did not have a road, nor a car to take them to safety. It is easy to get lost up at 8500 feet with the snow that comes down at that altitude.

Patty Reed, being one of the youngest children in the party was subjected to starvation while being lost in the snow in the mountains with her parents and the other pioneers. This must have been a terrifying ordeal for a child as it went on for months.

Published in the “California Star” shortly after a rescue party left Sutter’s Fort to search for survivors in the Sierra, this is the first newspaper reporting of the plight of the pioneers.

This link from The Virtual Museum of the City of San Francisco contains a letter written by Mrs. Frank Lewis in 1918 after the unveiling of the memorial to the Reed and Donner Party in June, 1918. Notice that she uses the word “onward.”

After reading all of this, I went to read the back of this postcard again: 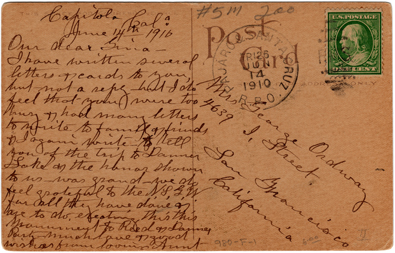 This card, though written in Capitola, California on June 14, 1910, was actually mailed from Santa Cruz to:

I have written several letters and cards to you, but not a reply – but I do feel that you were too busy and had many letters to write to family and friends and I again write to tell you of the trip to Donner Lake and the honor shown to us – it was grand – we do feel grateful to the N.S.G.W. for all they have done or are to do erecting this monument to the Reed and Donner Party – much love and good wishes from your loving Aunt.”

N.S.G.W. stands for Native Sons of the Golden West which is listed as the society that erected the Donner Party Monument.

So, the question is – Is this postcard written by Mrs. Frank Lewis herself? Am I holding a piece of American history – a letter on an old postcard that I’ve had in a pile of postcards for some time, written by the woman who was little Patty Reed?

Answer~~ A search on ancestry.com shows that Patty Reed had a half sister named Virginia. Their mother was married to Virginia’s father who died, then married James Reed, Patty’s father. Virginia Backenstoe married and had nine children, one of which was named Virginia. Gina or it could even be Ginia in this card, is most probably that daughter. I believe this postcard is written by Mrs. Frank Lewis née Patty Reed.

This is another good reason to go vintage postcard hunting – you may just find a piece of American history in a pile of old postcards for $2.00.