This George Washington patriotic postcard is from 1907. The left side of the postcard shows General George Washington taking command of his Army at the beginning of the Revolutionary War. The image on the right shows him saying farewell to his officers at the end of the war.

Short History of the Scene

When the Second Continental Congress assembled in Philadelphia in May 1775, George Washington, one of the Virginia delegates, was elected Commander in Chief of the Continental Army. On July 3, 1775, at Cambridge, Massachusetts, he took command of his troops, most of whom were simple farmers. Thus they embarked upon a war that was to last six grueling years and end with freedom and the establishment of the United States of America as an independent nation.

George Washington was born on February 11, 1731, according to the Julian calendar, which was the calendar in use at the time of his birth. However, before the Revolutionary War, England switched to the Gregorian calendar, moving all dates 1 year and 11 days forward and making Washington’s birthday February 22, 1732. Read more about the American federal holiday of George Washington’s Birthday.

This postcard was originally published by Raphael Tuck and Sons. It is from series No. 124, titled “George Washington’s Birthday.” There are six postcards in the series. Every postcard in this series has the American Flag as the background with a scene or two from George Washington’s life as the featured image. 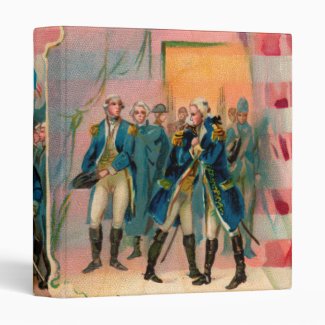