(The following are excerpts taken from the State of Pennsylvania General Assembly website:

What is today the state of Pennsylvania was originally formed by a land grant to William Penn. Penn was born in London on October 24, 1644, the son of Admiral Sir William Penn. Despite his social position and education, he converted to the beliefs of the Society of Friends, or Quakers. He used his inherited wealth and rank to benefit and protect his fellow believers. Despite the unpopularity of his religion, he was socially acceptable in the king’s court because he was trusted by the Duke of York, and later King James II.

King Charles II owed William Penn £16,000, money which Admiral Penn had lent him. Seeking a haven in the New World for persecuted Friends, Penn asked the King to grant him land in the territory between Lord Baltimore’s province of Maryland and the Duke of York’s province of New York. With the Duke’s support, Penn’s petition was granted. 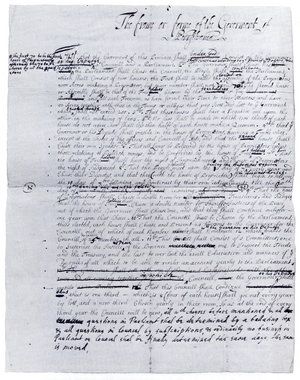 In April 1681, Penn sent his cousin William Markham to be deputy governor of the province and in England, Penn drew up the First Frame of Government, his proposed constitution for Pennsylvania. Penn’s preface to First Frame of Government has become famous as a summation of his governmental ideals. In October 1682, the first General Assembly in Pennsylvania united the Delaware counties with Pennsylvania, adopted a naturalization act and, on December 7, adopted the Great Law, a humanitarian code that became the fundamental basis of Pennsylvania law and which guaranteed liberty of conscience.

Although William Penn was granted all the land in Pennsylvania by the King, he and his heirs chose not to grant or settle any part of it without first buying the claims of Indians who lived there. In this manner, all of Pennsylvania except the northwestern third was purchased by 1768. The Commonwealth bought the Six Nations’ claims to the remainder of the land in 1784 and 1789, and the claims of the Delawares and Wyandots in 1785. The defeat of the French and Indian war alliance by 1760, the withdrawal of the French, the crushing of Chief Pontiac’s Indian alliance in 1764, and the failure of all attempts by Indians and colonists to live side by side led the Indians to migrate westward, gradually leaving Pennsylvania.

William Penn’s heirs, who eventually abandoned Quakerism, were often in conflict with the Assembly, which was usually dominated by the Quakers until 1756. One after another, governors defending the proprietors’ prerogatives battered themselves against the rock of an Assembly vigilant in the defense of its own rights. The people of the frontier areas contended with the people of the older, southeastern region for more adequate representation in the Assembly and better protection in time of war. Such controversies prepared the people for their part in the Revolution.

By 1776, the Province of Pennsylvania had become the third largest English colony in America, though next to the last to be founded, Philadelphia had become the largest English-speaking city in the world next to London. Philadelphia was a center of resistance to the Stamp Act (1765) and moved quickly to support Boston in opposition to the Intolerable Acts, in 1774. Pennsylvanians may well take pride in the dominant role played by their state in the early development of the national government. At the same time that Pennsylvania was molding its own statehood, it was providing leadership and a meeting place for the men concerned with building a nation.

Pennsylvania troops took part in almost all the campaigns of the Revolution. A rifle battalion joined in the siege of Boston in August 1775. Others fought bravely in the ill-fated Canadian campaign of 1776 and in the New York and New Jersey campaigns. The British naturally considered Philadelphia of key importance and, in the summer of 1777, invaded the state and captured the capital. The battles of Brandywine, Germantown, and Whitemarsh were important engagements of this period. Following these battles, Washington went into winter quarters at Valley Forge from December 1777 to June 1778. News of the French alliance, which Benjamin Franklin had helped to negotiate, and the adoption of new strategy caused the British to leave Philadelphia in the spring of 1778. Frontier Pennsylvania suffered heavily from British and Indian raids until they were answered in 1779 by John Sullivan’s and Daniel Brodhead’s expeditions against the Six Nations Indians. Pennsylvania soldiers formed a major portion of Washington’s army, and such military leaders as Arthur St. Clair, Anthony Wayne, Thomas Mifflin, and Peter Muhlenberg gave valuable service. Pennsylvania also aided in the creation of the Continental navy, many ships being built or purchased in Philadelphia and manned by Pennsylvania sailors. The Irish-born John Barry became first in a long list of Pennsylvania’s naval heroes.

Pennsylvania and the United States Constitution

Because of a lack of central power, as well as financial difficulties, the Articles of Confederation could no longer bind together the newly independent states. As a result, the Federal Constitutional Convention met in Philadelphia in 1787. The structure that evolved remains the basis of our government today. The Pennsylvania Assembly sent eight delegates to the Federal Convention. Four of these had been signers of the Declaration of Independence. The delegation included the venerable Benjamin Franklin, whose counsels of moderation on several occasions kept the convention from dissolving; the brilliant Gouverneur Morris, who spoke more often than any other member; and the able lawyer James Wilson, who, next to Madison of Virginia, was the principal architect of the Constitution. Pennsylvania’s delegation supported every move to strengthen the national government and signed the finished Constitution on September 17. The conservatives in the Pennsylvania Assembly took swift action to call a ratifying convention, which met in Philadelphia on November 21. The Federalists, favoring ratification, elected a majority of delegates and, led by Wilson, made Pennsylvania the second state to ratify, on December 12,1787.

Large areas of the northern and western parts of the state were undistributed or undeveloped in 1790, and many other sections were thinly populated. The state adopted generous land policies, distributed free “Donation Lands” to Revolutionary veterans and offered other lands at reasonable prices to actual settlers.

Today, ARose Books, owner of Vintage American, is housed in a 150 year old home in Pennsylvania on land that was once part of a deeded grant to a Revolutionary War Veteran.