Wrangell, Alaska is noted for its wonderful evenings and sunsets. This photo for this vintage postcard was taken at 10:15 PM, circa 1930’s. The original postcard is dated July, 1935 and was sold by the Bear Totem Store in Wrangell.

Before Alaska was part of the United States, it was Russian territory. The Russians were trading for furs and other goods with the Tlingit tribe at and near Wrangell in the 1800s. Baron Wrangel was head of the Russian government in what is now Alaska. He had a fort built at Wrangell which was later used by the Hudson’s Bay Company and named Fort Stikine under British rule.  Once the U.S. purchased Alaska, this fort became Fort Wrangell and was used until 1877 by the military. After that, with the gold rush in full force it became a trading post once again. 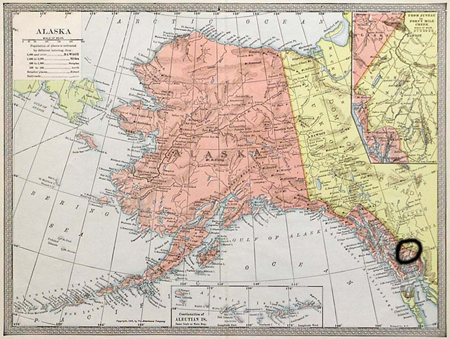 The town of Wrangell, one of the oldest non-Native settlements in Alaska, is located along the “Inside Passage,” or the Alaskan Panhandle, on the northern tip of Wrangell Island. It is across from the mouth of the Stikine River on the Alaska mainland. The town and the island are both named after Baron Ferdinand Petrovich Wrangel. (See the black circle on the map.)

The Bear Totem Store, where this postcard was sold, was built in the 1920s by Walter Waters. According to town history this store sold Tlingit arts and crafts, including a number of irreplaceable totem poles. Before opening the store, Waters carried the mail by boat from Wrangell to other parts of the Alaskan Panhandle. In his travels and work along the coast of Alaska, Waters met many of the Tlingit tribe trading for furs and purchasing artwork from them to finally allow him to open his store. Unfortunately, a fire in the 1950’s burned the store down along with much of the downtown Wrangell business area. This fire changed the look of Wrangell as many of the historic buildings were lost. You can read more of the history of Wrangell from their own town history site. 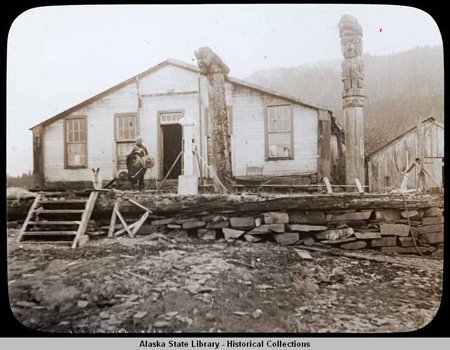 This is the clan house of Chief Shakes, called Shéiksh Hídi, of the Tlingit tribe. This house was located about 13 miles (21 km) north of Old Wrangell, on a small island in the middle of what is today Wrangell Harbor.

One of the more beautiful aspects of the Tlingit tribe is that each clan of the tribe has a wonderful and unique creation story that has survived contact with Europeans and Americans. Each clan has their own story that is private to the clan and explains their origins through the stories of ancestors. The Alaska Native Knowledge Network (ANKN) shows the Tlingit tribal list of clans and maps of clan locations.

There is a wonderful story of children playing sandlot ball in Alaska by Josh Miller, of the Tlingit tribe, in the book Sandlot Stories. ARose Books was very proud to get Josh’s story as he is a fine writer with a great future. He was staying in Incline Village, NV at the time that Sandlot Stories was produced, having been sent to college in Lake Tahoe by the Tlingit tribe so that he could study writing.

The Stikine River is featured in one of the scenes of pursuit after the owner of the golden snare in James Oliver Curwood’s book, The Golden Snare.

To a get a great feeling of what it was like to sail through Wrangell bay in 1910, read The Alaskan, by James Oliver Curwood, a story of the fight to save and use Alaska’s precious resources properly amidst the greed and political corruption at that time. The story starts with the main characters sailing through the bay in the early 1900s to their destinations in Alaska. Either of these books will give you a good idea of what that part of the country was like in 1910, not long before this card was made.